Last year, while in Phoenix for my cousin Alex's wedding, Zorg and I toured Taliesin West, Frank Lloyd Wright's desert studio. In the late 1930s, Wright had led a team of students building the place to fit the site: local stone, designs that channeled cooling breezes through the residence area, and an amazing studio with a ceiling made of canvas panels.. According to our guide, the canvas blocked the heat while allowing a soft, natural light that was perfect for working on architectural drawings.

All I knew was that I loved that light.

I explored triangular shades (a square one won't fit, because the wall is triangular) and they're expensive. The first year, I put cardboard over the window -- the effect was pure trailer park. The second year, I got a thin piece of white foam insulation, trimmed it with clear packing tape, and fastened it in place with wingnuts. It was sturdy enough to be put into use last year as well. This year, I decided to make a Taliesin West canvas panel. (The panel would go inside of, not in place of, the glass window -- this being the Pacific Northwest and not the desert.)

Surprisingly, there were no references to canvas ceiling or window panels anywhere on the web (except for some sites about Taliesin West itself).

Because of the convoluted trim on our triangular window, the frame for the canvas would need to be shallow -- less than an inch thick. I got some high-quality 3/4" x 1-1/2" fir from Limback Lumber, used a miter box to make the sides of the frame, and fitted these to the not-quite-symmetric window. When it appeared there was a fit with all three pieces, I put together the pieces using a staple gun and 1/2-inch staples.

Ballard being a nautical center, there was no problem getting canvas (Canvas Supply on Ballard Avenue). I got a 4 x 4-foot piece for $12, stapled that to the frame, and, with a little snarling, got it wedged in to the window box and secured with the wingnuts. Here's a picture of the canvas frame, followed by a shot of the bedroom in the natural canvas light. 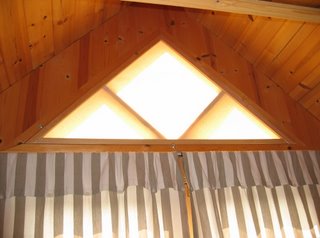 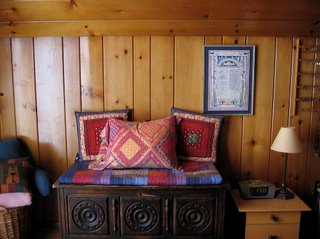 Someday I want a studio with canvas skylights.

Posted by The Mysterious Traveler at 4:34 PM