One of the new online memes, which I plucked from the thought-provoking Music and Cats, is "23/5." It works this way:

One percent magic
Ninety-nine percent of writing is practice and hard work, but the one percent that's magic is important, too. The Oct. 27 issue of The New Yorker has an article on the career of Toni Morrison. The article closes with Morrison showing the writer where she writes—not in her office, but on a rustic Norwegian wood table in her kitchen. That makes perfect sense.

The problem here is that this post has only four sentences. There is nothing to ponder for meaning, subtext, or hidden agendas. Whew!
Posted by The Mysterious Traveler at 10:37 PM 1 comment:

I am looking forward to recovering completely from my weekend visiting with my mother's friends in LA. [...]

Looking back on it, the visit to LA just had to have been a dream. And it did have a surreal ending. On the way to the Burbank airport, we saw a bright red antique roadster tootling along in the righthand lane of the freeway. As we passed it, we got a closer look at the driver: It was Jay Leno.
Posted by The Mysterious Traveler at 8:28 PM No comments:

I came home from my travels to find two odiferous little spots on the floor at my end of our closet. The cats apparently whiled away the hours while I was gone studying these feline communications tips from The Joy of Tech.
Posted by The Mysterious Traveler at 2:19 PM No comments:

Now I don't have to

Yup.
Posted by The Mysterious Traveler at 5:47 PM No comments:

I'm in Cupertino for a product launch. We got stuff done around midnight last night, and today everyone is wandering around in a bit of a daze. Eight of us went out for a dim sum lunch, which is much more interesting when several folks in your party are Chinese, or have grown up exposed to Chinese and Asian culture. There was one dish that I'd never seen before, and we didn't try it since it did not turn up until we had reached the dessert stage of the meal. It was a stuffed green vegetable that looked like a green pepper. I was informed that it wasn't a pepper, and it tastes "very very strong!"

Next time.
Posted by The Mysterious Traveler at 1:33 PM No comments:

[a post by Kaylee and Zoe]
Suddenly she opens the back door and it's all cold and wet out there. Can't she get anything right? Boy, has the level of service ever declined around here. We're reporting this to Zacats -- as soon as we finishing downloading brochures for Arizona and Palm Springs.

Don't think we're being passive-aggressive. We confronted her directly by tearing all the papers off her bulletin board and all she did was show us the open door, apparently oblivious of the unacceptable environment out there. She mentioned something about "an estimated seven months of downtime." No wonder Smokey switched to another household. We've even heard rumors that she's going to San Jose and Los Angeles next week and leaving us here.
Posted by The Mysterious Traveler at 9:55 AM No comments:

A couple times in the past week either Kaylee or Zoe has gotten back outside after dark and refused to come in. Evening is a particularly quiet time on our street; on weeknights, all the neighbors are home by 7. This makes the dead-end street an ideal place for the cats, and they are all out chasing bugs under the streetlights.

Once one of the Stripe Sisters gets out, the other one sits in a window and yowls loudly and (apparently) incesssantly. I've given in to temptation and let them both out just to get some peace.

We have created a precedent, and it's a bad one.

Tonight I was determined to keep them in. They yowled. They were bored. Kaylee reverted to her old habit of attacking my bulletin board and removing the pushpins. I gave them catnip, but a half hour later they were back in my office, looking stoned AND bored. Finally I hauled out the garish nylon "cat tunnel," a long Y-shaped tube they can hide in. From the crashing and thumping I hear coming from the livingroom, it seems to be working.

But I have to admit, it's probably much more fun to hide under a bush on a warm evening and leap out at moths.
Posted by The Mysterious Traveler at 8:02 PM No comments:

If demands that Intelligent Design be taught in schools have you steamed, you'll love the Flying Spaghetti Monster. Coming soon to a textbook near you! (Note to self: Never run for School Board.)
Posted by The Mysterious Traveler at 12:25 PM No comments:

Have you visited someone's blog recent and seen bizarre comments posted that refer only tangentially to the blog but go on to advertise something? That's comment spam. Blogger now lets me turn on a word verification feature to prevent comment spam.
Posted by The Mysterious Traveler at 9:52 PM No comments:

December, 1973 -- My job during Christmas vacation from college was to get up before dawn in the frigid New England winter, bundle up as if for an Artic trek, and drive the family car to the gas station. There I would buy a cup of lousy coffee and a pile of newspapers and wait two or three hours in a gas line.

Fortunately, one of the family gas-guzzling Impalas had a license plate that ended in an even number while the other car's plate ended in an odd. Under the Massachusetts rationing system of odd and even days, that meant I could be gassing up one car while my mom was driving the other one on her dailly commute from our house on the Cape to Boston, where she worked and where her elderly parents lived. The next day we switched cars and did it all over again. My father instituted a strict system of recording all gas purchases and mileage in little notebooks kept in the glove compartments.

In those days, cars didn't have locking gas tanks, so after you filled up, your next task was to back the car into the driveway with the side with the gas tank as close to the house as possible. All porch and yard lights were left on through the night to thwart gas thieves who were cruising the neighborhoods with gas cans and siphoning equipment. This fortress mentality was even creepier given our living arrangements at the time.

My parents had sold our house in suburban Virginia the previous spring and were supposed to be retiring to a new development in East Sandwich, a historic town on the Cape. My father had designed a large house overlooking the bay, but the builder had gone bankrupt and the subcontractors had walked off the job. While new house stood half finished, my folks were living in our tiny, uninsulated summer cottage in Dennisport. It had two little bedrooms, a closet-size bathroom with a shower (no tub), and a combined kitchen/diningroom/livingroom. The sole heat source was one floor register in the livingroom. Each morning, I woke up with ice on the insides of the windows of my bedroom, scraped the window, and peered out to make sure we had fuel in the two propane tanks outside. The washing machine, intended only for summer use, was in a closet off the back porch, where it was in constant danger of freezing water lines. Summer cottages didn't have dryers, so the clothes went out to the backyard clothesline where they were usually frozen before they were dry.

We were the only off-season residents on our winding dirt road and many days ours were the only cars that went down the street. We picked up our mail at the town Post Office, hauled our trash to the dump, and were eyed suspicously by the year-round residents, many of whom had been living on the Cape since their surly ancesters had arrived on the Mayflower and set about inbreeding. If I hadn't wanted to leave home for good when I first went off to college, I sure did after that long winter in Dennisport!

Today, when I paid $31.65 for 10.4 gallons of gas at the 7-11, it brought back memories of the winter of 73-74. I made a mental note to go home and check the insulation, caulk the windows, and get out my UGGs. I think it's going to be another long, cold winter.
Posted by The Mysterious Traveler at 4:55 PM No comments: 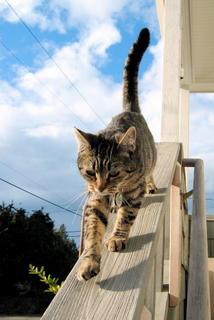 Here's Kaylee enjoying the beautiful September weather on our front porch.
Posted by The Mysterious Traveler at 10:24 AM No comments: