The return of the turquoise moth 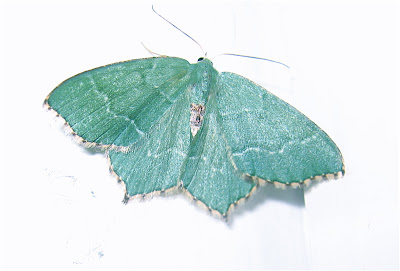 The turquoise moth I blogged about in July of 2004 was back last night. (Or, more likely, a relative of the original turquoise moth is putting in an appearance.) This year, I managed to get a picture of it.

Unfortunately, the cats were also trying to get it, and they were using claws rather than a camera. So I spent more time urging the moth to relocate than focusing the shot. It eventually moved to a wall over the bathtub -- an excellent choice. I'd just filled the tub with water for a bath, so any flying leap from a cat would have ended with a big splash.

I noted that first turquoise moth sightings were July 5 and 7 of 2004. This year I spotted it July 10. Obviously this is a seasonal visitation.

Can anyone identify this moth? The little guy has a wingspan of about 1 inch.

I've found a few other references to turquoise moths online, but they've all been like mine -- reports from non-moth people who found the moth in their house on a summer night.
Posted by The Mysterious Traveler at 11:56 PM