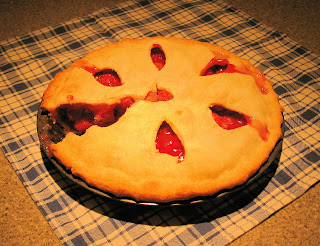 When we moved here five years ago, one of the charming features of the neighborhood was a huge garden maintained by an elderly Italian neighbor who owns several adjoining properties. Mike grew squash, and tomatoes, and beans, and corn; you'd see him every afternoon in his overalls, toting tools, and heading off to work in the garden.

Sadly, Mike began to suffer from dementia two years ago, and could no longer maintain the garden. Mike's family has since sold some of their property, including the garden lot and an adjoining rental house. The garden's new owners are former neighbors who now live East of the mountains; they've invited a few other neighbors to use the garden. But this year no one is growing much in it, and the lower section has gone to seed.

My friend Nilos and I were out walking Thursday and spotted a small cherry tree in back of the garden, filled with ripe cherries. We asked some of the neighbors about it, and they said we were welcome to pick the cherries. They'd tried them and found them to be rather sour.

Of course they were sour! They're Montmorency cherries, also known as old-fashioned pie cherries, which are available at only one or two Seattle farmers' markets, one or two weeks of the year. They're incredibly fragile, losing their bright red, translucent color and turning to a darker shade just an hour or two after you pick them. They need to be cooked, brandied, or otherwise preserved immediately.

On Friday Nilos and I picked about 9 pounds of them. Then I scurried down to the basement pantry and rummaged in the box marked "kitchen gadgets" until I found the little vintage cherry pitter. Using the pitter, and a narrow-tipped wooden chopstick, Nilos and I pitted the first nine pounds of fruit; she took them to Anita's and today they produced three gorgeous cherry pies. They brought one by for me. (Zorg, having been traumatized in his youth by a seasonal job as a commercial cherry picker, has a permanent aversion to cherries.)

With a ratio of 4 cups cherries to 1 cup sugar, the pie is perfect. Anita tells me that the thickener is the pie filling enhancer from The Baker's Catalog. [CORRECTION: the filling is Signature Secrets] And she did a butter crust, far more delicate than anything I'd have been likely to attempt.

Cherry pie made with old-fashioned pie cherries was my dad's favorite dessert. He and my mom had difficulty finding canned sour cherries when they moved to Florida, so I'd ship them cans of Oregon pie cherries. Since "real cherry" pie is such a family tradition, I called my mom tonight and invited her over to enjoy some pie tomorrow afternoon.

And I'm taking some pie over to Mike and his wife. That cherry tree was the only fruit tree in his garden, so he must have planted it because he liked those particular cherries. I figure that even if he doesn't remember the tree, he'll still enjoy the pie.
[NOTE: We used one of Nilos' professional pie crusts, but here's a link to my "no-fail" recipe -- easy to make and easy to handle.]
Posted by The Mysterious Traveler at 10:07 PM