Kaylee, the smaller of the two Stripe Sisters, often spends two or three hours in the morning playing her feline version of handball. She goes down to the bottom of the basement stairs, where two doors and a wall form three sides of her court and the open-riser staircase is the fourth. Then she smacks a rabbit-fur mouse around. 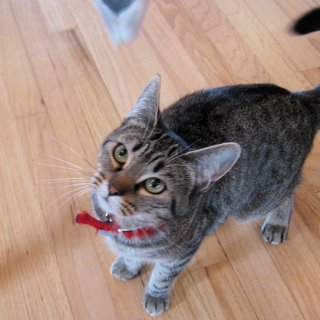 Her big sister, Zoe -- best described as "highly energy-conservative" -- sometimes flops at the top the stairs to observe this workout. She looks like a couch potato watching Venus Williams on TV.

Like a pro, Kaylee is very picky about her equipment. Forget synthetic mice: She insists on the authentic rabbit-fur wrapped rodent, with the hard cork core that makes a swatted mouse bounce so wonderfully and renders it light enough to be flung high into the air.

A few weeks ago, Kaylee started a warm-up routine in which she would bring a mouse into the bathroom while I was showering and place it on the bathmat. I noticed that if I tossed the mouse out the door, she'd bring it back and place it on the mat again. Hmmmm....

It took only a few days for me to train her to fetch -- and for her to train me to throw.

That's how the trouble started.

Kaylee's favorite part of her workout is the beginning, where she sends the mouse tumbling down the stairs into the court and races madly after it. Now she's decided this is much more fun if I throw the mouse for her to chase. When they both reach the bottom of the stairs, she retrieves the mouse and dashes back up with it so we can do it some more. I scratch her back and fuss over her, then toss the mouse, and she's off again. Cute. At least the first couple times.

Unfortunately, Kaylee now expects me to play this game with her for several hours at a stretch. If I wander off and get distracted by something like work, she comes and scratches on my office door to call me back to the playing field. "Coach! Coach!"
Posted by The Mysterious Traveler at 9:56 AM