In 2004, when I was with the iTunes Music Store, one of the consultant DJs assembled a playlist called "one-hit wonders." I was assigned to write a blurb about it. I disagreed with some of the artists placed on this list, including Alex Chilton (for, of course, "The Letter").

The more research I did on Chilton and his post-Box Tops work with Big Star, the more fascinated I became.

A few months later, I flew to Euless, Texas, to see him make a rare appearance at the Euless Arbor Daze Festival. The festival was held in an open field filled with crafts booths, barbecue stands, and an area roped off for an evening concert of old rock and roll. 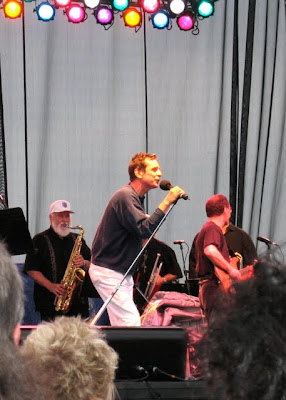 The oldies lineup included Sam the Sham and the Pharoahs and Chilton with the Box Tops. Chilton's voice was not in top form that night, but he seemed to be enjoying himself in his ironic way. I talked my way backstage after the set and got his autograph.

About 20 minutes later, a spectacular thunderstorm swept in across the plains, shutting down the rest of the evening. The parking area turned to a mudbath. I somehow got my rental car out of there and across the highway to a Denny's (next to my budget hotel). As I walked in, a fellow at a booth waved me over -- a Nashville sessions musician who was the keyboard player in the version of the "Box Tops" that had been put together for the gig. He'd seen me backstage, getting Chilton's autograph, and was curious — as I don't exactly look like a groupie.

We sat and talked for an hour or so -- mostly about the industry, but also about Chilton. A brilliant songwriter, but not an easy fellow to work with, it seemed.

Turned out the band was staying at the same hotel I was, so I gave the keyboardist a lift back in my car. It was only a block, but the whole area was knee-deep in water. I remember that it stormed relentlessly all night — pretty terrifying. The next day the weather cleared, and that night I drove to Dallas and went to Brave Combo's 25th Anniversary at Sons of Hermann Hall in Deep Ellum.

It was a weird trip — but I'm very glad I got to hear Alex Chilton live.
Posted by The Mysterious Traveler at 11:22 PM