Explaining Massachusetts to the West Coast 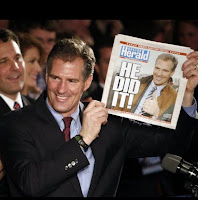 The liberal state of Massachusetts went and elected a Republican senator. How did this happen? Let me explain.

"Liberal" in Massachusetts is not like "liberal" in Seattle. It's working class liberal — people who believe in the right to organize, fair pay, job protection, free speech. But they don't really like seeing women get too much power — the gals should be home raising 10 kids.

And the working class liberals just can't resist handsome young male candidates — particularly ones who look like the local Irish attorney for the labor union. So they picked Scott Brown — someone who looks like a young Ted Kennedy even if he doesn't think like one.

Oh, where is George V. Higgins when we need him?

Now don't go and get all complicated about this one. That is so...West Coast.
Posted by The Mysterious Traveler at 9:04 PM