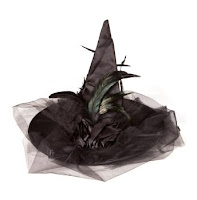 Most science fiction conventions involve massive numbers of fans honoring a few professionals in the field, but World Fantasy is different. It's all about the professionals (writers, publishers, agents, reviewers, book dealers) doing business with each other while a smaller group of (mostly local) fans runs the logistics and looks on respectfully.

So forget the convention stereotype of Star Trek fans stomping around dressed as Klingons, or furries in full fox suits...the look here is definitely chinos and t-shirts for most, with black jeans and black t-shirts for the urban noir contingent. It turns out that the governing board even prevented one of the book dealers from displaying their steampunk hats — the three jewelry dealers (two high-end, one not-so-high-end) apparently got in as fantasy-themed artwork and are doing a brisk business in steampunk-related items.

However, with the convention coinciding with Halloween this year, the unwritten "no costumes" rule is tough to enforce, even with raised eyebrows and management disapproval. As the day goes on, more and more witches and wizards are turning up in the elevators. In fact, they've got one running Ops.
Posted by The Mysterious Traveler at 12:53 PM