I've been bidding on some fascinating projects recently. One would involve writing a humor column. The other is a comprehensive marketing communications program for a group of developers with an aggressive business plan. So: Lots of bids, lots of emails, lots of meetings. 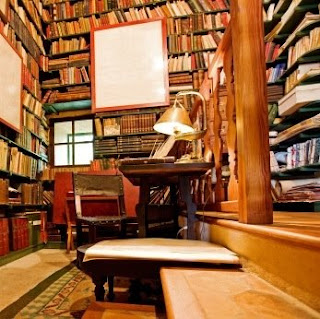 Last night I dreamed I'd been hired to do marketing communications for a non-profit. I wasn't that interested in the work, but needed the money. The non-profit had offices in an old industrial building near Pioneer Square, and while waiting for the elevator there, I got talking to a man who had just come out of a big office that looked like a turn-of-the-century newsroom.

Through the dusty glass windows, I could see that the room was filled with intellectual-looking folks, lounging about and reading — old hippies and bohemians and academics. It turned out that the man on his way out was the managing editor of a magazine; he'd just quit because he was fed up. He asked me if I wanted the job — said the writers were impossible to manage. I asked him how much the editor's job was paying. He quoted quite a respectable amount, and I asked for an additional 10 percent.

He disappeared into the elevator and I walked into the magazine office. It was filled with floor-to-ceiling bookcases and massive oak desks; all the horizontal surfaces were covered with books and papers. The writers, mostly men, but some women, looked at me with expressions that would have been considered glares if they had been more energetic.

I picked up a phone (it was an old, dial phone) and began calling one of my two favorite editors in town. I was convinced that if I could get those two guys in to work with me, we could whip the place into shape. I remember being rather pleased that I felt so confident.

This has to be the first time I've ever dreamed about running a magazine!
Posted by The Mysterious Traveler at 6:19 PM