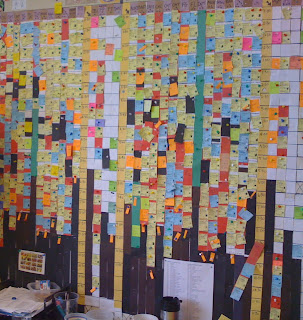 I'm heading off to Folklife tomorrow morning for my 24th year at the festival. I've volunteered all 24 years, performed (with Nonesuch English Country Dance) for a half-dozen years, and was even on the board for a few years in the early '90s.

If you are a visitor to Folklife, three things will amaze:
• The breadth and depth of the performances, particularly the ones on the indoor stages.
• The fact that all the performances (with the exception of one benefit concert) are free.
• All the opportunities to jump in and participate — at the Roadhouse dance hall and the Center House dance venue, and at dozens of small specialty workshops.

As a volunteer, what amazes me year after year is the way the festival runs itself, with the vast majority of the work being done by experienced volunteers. The Folklife staff plans the event in meticulous detail (see photo, above) but when the festival goes live, their work becomes coordination of the volunteers, who are out there emcee-ing the stages, manning the info booths, asking for donations at the entrances, and performing on the stages.

Folklife is an organizational wonder.
Posted by The Mysterious Traveler at 10:28 PM