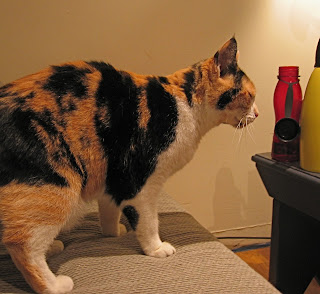 Do you wish you had a cat to pet, but you don't have the time or living arrangements to commit to a longterm feline relationship?

Come pet Jessica. She's the beautiful calico who's boarding with us for a couple of weeks. She's a lap cat, a snuggler, and very friendly. She lives in our TV room, and she's bored.

Two days ago, she started yowling when she was alone, so we let her out to explore the rest of the house. She walked around, seemingly unconcerned about our three wide-eyed cats, and seemed to be having a marvelous time. But last night it apparently occurred to her that it would be even more marvelous if she were the only cat in the house. And she started stalking and chasing the two tabbies. They were fleeing in terror, but Jessie was bounding happily along like a gazelle.

We caught her and put her back in the TV room for the night. This morning she yowled to be let out, but when we let her out, she went after Zoe, our big, rather clueless tabby, like Attila the Hun sweeping across the steppes. (Kaylee, the little tabby, was already hiding somewhere where no one could find her.) It wound up with Zoe cringing in a corner with Jessie flailing away at her. Zoe, whose idea of a really bad time up until then had been having to wait 10 minutes to get in or out the back door, was badly shaken.

I snagged Jessie, spoke to her very sternly, and put her back in the TV room. Interestingly, there was no yowling after that. There hasn't been a peep out of her all day.

But we've agreed that Jessie has lost her roaming privileges. So, if you'd like to visit our little prisoner, let me know.
Posted by The Mysterious Traveler at 4:00 PM