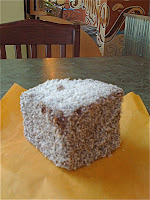 A little after 4 p.m. today, I trudged into The Grindhouse at 318 Blanchard in Belltown and looked blearily at the pastry case.

I'd had five hours of sleep, an early-morning battle with Microsoft Word, a long morning at a seemingly endless exhibit of Roman antiquities from the Louvre, and followed it all up with two hours of interviews with previously homeless people for an article I'm writing about a new public housing development in Belltown.

"Try a Lamington," the barista suggested.

A Lamington turned out to be one of the most delicious pastries I've ever tasted — as good as any of the afternoon treats I've had in Paris, Florence, or even Vienna.

The Lamington hails from Queensland, Australia (well, the local version is from the Australian Pie Company in Burien). Named after a Baron Lamington, the a past governor of Queensland, it's a cube of light-as-air moist yellow cake, dipped in the thinnest layer of chocolate, and coated in finely grated coconut.

(Here's a recipe for Lamingtons — but I wouldn't advise using pound cake. It's the light fluffiness that's so amazing.)
Posted by The Mysterious Traveler at 10:11 PM