My friend Rae turned me on to a charming blog co-written by a pair of women in their 80s, with some of the best political writing I've seen online since Molly Ivins passed away. (Oh, what Molly would have done with Sarah Palin's candidacy!)

I'm feeling cheerful about blogging today. A reporter from a major news publication came across something I wrote in Mysterious Traveler a few weeks ago, emailed me, and then interviewed me for a trend story that's scheduled to appear in November. If I'm quoted, you'll be among the first to know. (My Twitter peeps will probably hear about it first.)

Nice that my online life is going well. Wish I could say the same for physical reality. A team of Salvadoran house painters is sanding and priming the living room and dining room...their paint prep work is good, but they didn't cover the buffet, and then plonked a bunch of Venetian blinds on it. Grrrrrr.
Posted by The Mysterious Traveler at 9:16 PM No comments:

What's on the table 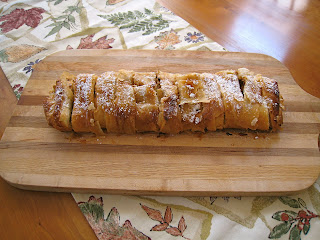 This weekend I made an apple strudel with fruit from the columnar apple tree. The recipe, from Cook's Illustrated, included peeled, sliced apples, raisins simmered in Calvados, toasted pecans, lemon juice, and a bit of sugar. You wrap the filling in five buttered sheets of filo dough, score the roll, and bake at 475 for 15 minutes. Cool, slice, then sprinkle with confectioner's sugar. Pretty easy.

I got a new tablecloth for fall at the local consignment shop, Imagine That. Unfortunately, Zoe found it before I put it away, so now it needs to be washed. 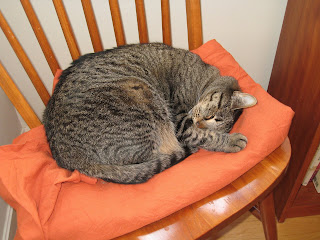 I've been swamped with work, including one particularly complicated website catalog that goes on, and on, and on.

My mom is preparing to depart for her winter in Florida (Thursday) and that'll be about the time that the painters arrive to do the living room, dining room, and hallways in exciting new colors. (Well, not exactly exciting, but certainly less neutral neutrals.) Preparing for that will involve moving all the window treatments, pictures, and breakables to the basement, including all the china from the china cabinet. Unfortunately, the previous owners used high-gloss on the window trim, baseboards, and five doors. That will have to be sanded in order for the new semi-gloss to adhere properly, which drove the bids up a bit. After the professionals do the more visible rooms, I'll be tackling the yoga room and bathroom painting myself.
Posted by The Mysterious Traveler at 9:36 PM 1 comment:

Lighting at the house took a big step backward this week. The $300 Rejuvenation Lighting fixture with the GU24 incandescent bulb purchased last year was going dim. I removed the bulb and saw scary burn damage where the glass meets the head of the bulb. A call to the 1-800 number for the bulb manufacturer revealed that the GU24 bulb isn't supposed to be used in conjunction with a light sensor, which I'd been using. (Boo! to the electricians, who seemingly hadn't been aware of that when they installed the fixture and the sensor.)

A call to Rejuvenation with questions initially got the answer that it should work with a light sensor, but as we discussed it further, they decided that if I was using a light sensor in the house wiring, I'd need the model of that fixture that takes an incandescent bulb. They then immediately offered to replace my year-old fixture with a new one. So, while I won't be saving the environment using a fluorescent bulb, I will at least be saving it using a light sensor.
Posted by The Mysterious Traveler at 12:23 PM No comments:

I don't exactly watch TV. Certainly not in the traditional sense. Network TV is something I see and overhear in bars, or at the airport. Cable TV is something other people have that I see if they've recorded something to TiVo.

I just bought a 32" flat screen TV (laughably small, I'm told) so I can watch new DVDs and old videos; my DVD player and VCR are both connected to it.

But I also use iTunes, and often buy TV shows and movies to watch on my iPhone when I travel. I've thought about watching the movies at my desk on my iMac but...I spend all day at the desk working, and my little office isn't exactly a place to hang out with friends and watch a film.

Apple TV is a way to watch iTunes downloads and rentals on a TV in another room. But I've been reluctant to buy the little Apple TV device (with its not-so-little price tag) because I couldn't quite believe that it could get a movie from my iMac to my TV (two rooms away) without loss of quality.

Now I have a book that explains it all: The Apple TV Pocket Guide by Jeff Carlson (PeachPit Press, 2008)! And I've put Apple TV on my Christmas list.
Posted by The Mysterious Traveler at 4:46 PM No comments:

A thousand years from now some archeologist will be pondering over early 21st century skeletons and wondering why we all had hunched shoulders. Or perhaps some of us will be buried in our Aerons and the answer will be obvious: deskwork.

Massage therapist Larry Swanson has assumed the persona of The Office Rat to help us bring a fitness mentality to our office jobs. His Office Rat blog provides a tip a day, many with You Tube videos, to help us combat desk debilitation. Larry interviews fitness and bodywork experts like Reta Wright-Kinghorn (a sleep disorders clinician) and Lara McIntosh (from Wassa Dance), and draws on his own experience as a massage therapist.

Larry is the therapist who helped me figure why I was having trouble with the warrior poses in yoga. He showed me how years of hunching over a keyboard had shortened and tightened the muscles in my chest, making it very difficult for me to release and extend my arms back and out to the side. Some assisted stretching, and persisting with the yoga, eventually solved the problem.

Check out his latest tip, on stretching your forearms.
Posted by The Mysterious Traveler at 10:56 PM No comments:

I spent last week stressing out trying to pull together a 45-minute talk for a blogging conference that took place Saturday at UW. It was hard work, but the conference, BigFoot Blogging, turned out to be worth it. It was the type of conference at which most of the audience members were qualified and articulate enough that they could have switched places with the speakers. The questions really had us hopping.

I have to confess that I needed to spend most of Sunday recovering. (How do the presidential candidates do it? Day after day of speeches!)

The plan for this week was to refocus on my clients' projects. That didn't get off to a good start today when I got tied up trying to express-ship some legal documents to a friend in Korea.

Then an amazing work opportunity appeared in my inbox this evening. Pulling together a proposal will be even more challenging than creating the conference talk and slides. Here we go. Again.
Posted by The Mysterious Traveler at 8:57 PM No comments:

For the past few weeks, there've been "missing cat" posters all up and down 34th Avenue NW. Now we know why: A neighbor spotted a coyote on 34th between NW 68th and NW 70th — just six blocks north of us, and one block north of where Smokey lives with his co-owner.

Smokey is not much of a wanderer, and lives in greenhouse in a gated yard. However, our kitties Kaylee and Zoe go out in the evening, and this has me very unhappy, as a coyote can cover quite a bit of territory. They will not be happy if I try to keep them in, but we may have reached that point.
Posted by The Mysterious Traveler at 10:15 PM No comments:

And there's one more day yet.
I spent last weekend at Foolscap, a science fiction convention, the first one for which I've stayed in the hotel and been immersed in programming and socializing. I had a minor volunteer role, which provided some structure to the weekend. Otherwise I simply went around and chatted with folks -- including an SF dignitary who has the same name as I do (which had led to confusion at a previous con, until the late Anita Rowland came up with the idea of prefacing my name with "The Other" on my badge).
One of the distinctive elements of Foolscap is that it's a highly participative con. Many attendees signed up in advance to be on panels. I was on two, including a late-night exploration of vampire romances. That was particularly weird because, to everyone's surprise, Foolscap was sharing the Marriott with...a vampire convention.
The vampire contingent pretty much kept to themselves, though I did get a few looks as I was going down in the elevator to the vampire panel wearing a long black silk skirt, black high heels, and a black velvet blouse.
Not sure what the vampires were doing, but our programming included late-night story telling, a radio play, a round-robin writing collaboration using manual typewriters, an art show, and an auction (at which I won a celadon green wool scarf knitted by a local author).
On the way back from the con, I went to a "naked ladies" clothing exchange organized by women in the Seattle contradance community. I brought two dozen tops to exchange, and came away with some interesting items for the steampunk costumes I'm working up for Orycon in November. These included a long wool walking skirt that appears to be a reproduction of an Edwardian skirt.
In contrast to the playful weekend, the week has been a relentless schedule of writing, editing, and meetings, along with interviews with new clients and prospective clients. I've been starting at 7 a.m., and still editing at 11 p.m. My new TV, a 32" LCD, arrived Wednesday and I haven't even tried to take it out of the box yet.
Watched the Palin-Biden "debate" tonight with friends at the Red Door. It wasn't much of a debate; mostly the candidates seem to pretend the other one isn't there. Palin didn't even answer the interviewer's questions. I think it was disgraceful.
Posted by The Mysterious Traveler at 12:23 AM No comments: