The gift of restoration and preservation 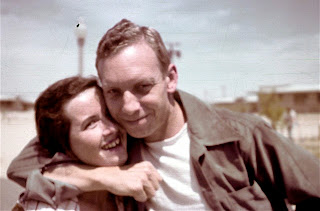 Today was my parents' 60th wedding anniversary. For the past few years, I've been sending my mom anniversary cards with images from my dad's slide collection. This year's card has a photo of my parents in the Mojave Desert, where they worked on a Navy base during World War II.

Converting my dad's slides to digital images was one of the best moves I ever made (it was something like 20 cents per slide).

This year I'm having my grandfather's choir's record of Christmas carols (a 78 rpm disk) converted into music CDs for all my cousins. The work is being done by a Shoreline business called Precision Audio Restoration, which offers not only restoration of the audio, but beautiful graphics for the CD and CD case. I'd been planning this project for years, but ran into difficulty when the original record disappeared. We found it this summer, carefully stored inside the box for The Messiah in my dad's LP collection. (Which makes sense, if you think about it: Christmas music.)

My errands today included a stop at Annie's Art and Frame in Ballard, where they worked with me to pick out mats and a frame for a delicate Japanese-style limited edition print from the 1930s. Apparently there's still plenty of time to get stuff framed for Christmas -- they promised my piece, which is fairly complicated, would be ready in a week. (Annie's also has the most wonderful stocking stuffers and Christmas cards!)

I've resolved to take more photos this year, and to record more audio and video, so I can give people truly personalized gifts next year.
Posted by The Mysterious Traveler at 6:16 PM No comments: Links to this post 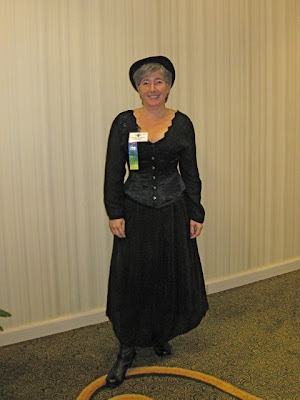 • hat from antique shop in Edmonds
• dress from one of the contragals (via a Naked Ladies party)
• corset from Xcentricities
• boots by Corso Como
Posted by The Mysterious Traveler at 12:46 PM No comments: Links to this post

Joe is looking for Michele Wolf

Joe Hage, a marketing strategy executive for whom I'm do writing and editing, is putting social media channels to work in an attempt to find an old friend of his. Her name, Michele Wolf, is common enough that she's difficult to find through the usual channels such as Classmates.com or LinkedIn.

Joe's asked friends and colleagues to help out by linking to his blog post about Michele. Search engine optimization spiders will then push this highly linked post to the top of the search engines whenever someone (he hopes Michele herself) Googles her name.
Posted by The Mysterious Traveler at 10:11 PM 1 comment: Links to this post

I don't care how many projects I have piling up, I'm going to forget about them all day tomorrow. Except to be thankful for having all that paying work and some great clients.

Have a lovely Thanksgiving. If you're stressing out at all, give a thought to the Twitter friend of mine who went to brine his turkey today and found the cooler he'd used for brining the Easter ham still had brine in it...that, and a massive colony of mold.
Posted by The Mysterious Traveler at 8:31 PM No comments: Links to this post

November is flying by

This month is just flying by...I can't believe it's Thanksgiving this coming week.
Just took a three-day weekend to go to Orycon in Portland. It was my first large convention, and the first one where there was costuming. I couldn't resist that challenge, and brought down three steampunk outfits that went over extremely well. All of them featured Edwardian jewelry that had belonged to my grandmother.
The costumes at Orycon fell into four categories: Renaissance/Regency, space opera/superhero, fantasy/furry, and steampunk/pirate. With some interesting crossovers.
While it was fun to go parading around in costumes and getting photographed, I discovered that doing a con in costume has a couple of drawbacks. One is that you have to schlep a bunch of costumes, including boots and hats, to and from the hotel. The other is that you spend quite a bit of time talking with folks about costumes, and that means you have less time to talk with other people about reading, writing, science, politics, etc.
In the future, I'll probably alternate between going to cons as a reader/writer, as a concom volunteer, and as a costumer.
Pictures tomorrow.
Posted by The Mysterious Traveler at 10:48 PM 1 comment: Links to this post

Busy! Realized I'd better take a fall picture or two, even if it's just with the iPhone: 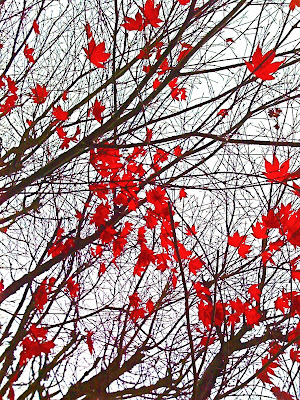 Posted by The Mysterious Traveler at 8:59 PM 2 comments: Links to this post 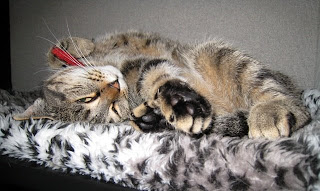 You don't become a "crazy cat lady" overnight. It sort of creeps up on you, one cat at a time, and then pounces, knocking things over, and somehow you never get around to picking things up again. You're too busy opening cans of cat food, and tossing catnip mice.

I've been to the brink (owning six cats at one point) but now have only three (well, three and one that lives with a neighbor but has vet coverage through me).

What I'm discovering is that you can attain "crazy cat lady" status with only three cats if the three cats are crazy themselves.

My cats are pretty crazy at the moment. The transition from sunny summer to rainy fall is always tough for energetic indoor/outdoor felines, and the deaf white cat, Sheba, is having a particularly bad time of it this year. Having the painters here for a week, which entailed moving her cat tree and other perches out of the livingroom, diningroom, and hall, clearly put her over the edge.

Saturday I found her in the bathroom, up on the counter. She'd unrolled most of a roll of paper towels from under the cabinets onto the counter, and had made a nest out of the towels. The nest was hidden behind the few towels that remained dangling from the roll. When I saw Sheba in the kitchen a bit later, I headed for the bathroom to clean up the mess of towels. There was something heavy in the nest, which turned out to be Zoe, the big tabby.

Later I heard yowling and found Sheba back in the nest. She'd unrolled the rest of the towels and was staring mournfully at the empty cardboard roll over head.

When I finally found the nest empty, I removed the towels and put down a somewhat more attractive looking towel. A few hours later I found Kaylee, the tiny tabby, had take up residence on the towels. And when I went to take a shower this morning, she was still sleeping there.

I now have no counter space on which to put magazines and a box of Kleenex because the space is taken up by a cat bed. And I don't dare put up a fresh roll of paper towels.

Instead, I've moved the cat trees and other perches back into the living room and dining room in the hopes that Sheba and the tabbies will gradually forget about the towel in the bathroom. Unfortunately, the towel is directly across from a heat outlet, so it may remain cat territory through the winter.
Posted by The Mysterious Traveler at 9:54 PM No comments: Links to this post 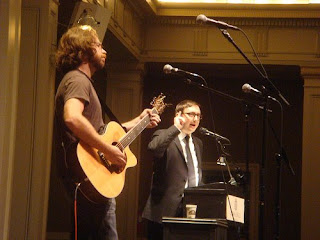 When the event ended and book signings began, Tom did go up and tell one of the event organizers about the car situation. We noticed on the way back to the parking lot that what seemed to be the same car was still there, as yet unticketed. And, if the Seattle parking folks did catch up with him later in the evening, perhaps he'll have a Seattle parking ticket story to add to his "minor television celebrity" tales.
Posted by The Mysterious Traveler at 8:29 PM 1 comment: Links to this post

Visit the developer's site to see a video of an iPhone ocarina ensemble performing "Stairway to Heaven." This just has to win an "app of the year" award.
Posted by The Mysterious Traveler at 5:10 PM No comments: Links to this post

I once called the manufacturers of Sheba's electronic cat-locator collars to complain about the heavy plastic clamshell packaging they use. When you attempt to open one of the clamshell packages using scissors, it splits and shatters into razor-sharp shards of plastic. Of course, the components of the electronic collar remain securely lodged (and taped) in various crevasses of the broken molded plastic.

The customer service rep who answered my call was not particularly sympathetic. She put me on hold while she located a package and scissors. She then got back on the call and started to open the package. I heard little scream, as she was stabbed by a piece of hard plastic. "You're right!" she gasped. "I'm bleeding."

It was hard to be sympathetic.

With a stash of 40 unopened cat-locator collars in the basement, I was delighted to read that Amazon.com has announced a collaboration with manufacturers to eliminate "wrap rage" (yes, it has a Wikipedia listing, which attributes the phrase to Consumer Reports) by the creation of "frustration-free" package. One of the first products to launch is toy pirate ship.

Meanwhile, they are collecting and displaying videos of "wrap rage" experiences — feel free to contribute!
Posted by The Mysterious Traveler at 11:52 AM No comments: Links to this post