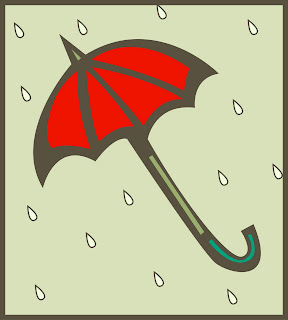 This won't be news to anyone living out here in the Northwest corner, but -- it's raining. Again.

The gray clouds are streaming past the windows of my office, with occasional glimpses of faint blue, but the rain is pretty much steady, and, at times, nearly horizontal.

My long, dressy winter raincoat with the wool lining, which I wear perhaps three or four times a year, is no match for this. I wore it today and the wool clung to the legs of my corduroy pants -- making walking awkward -- while the shoulders of the coat rapidly turned sodden. The hood blew off repeatedly in the wind.

I came home and hung the thing up to dry; when it does, it'll be on the fast track for the consignment shop. Then I went looking for a new dressy raincoat.

I was pretty sure that anything I bought at Macy's (that's where my current "raincoat" came from) would be purely cosmetic in terms of keeping me dry in a storm. So I went the opposite route, looking for "performance outerwear." Sounds serious. With that, waterproof is a given. But the challenge is to find something that doesn't make you look like a 17-year-old snowboarding dude.

Fortunately for me, Slate.com writer Seth Stevenson set out a few years ago to explore the mystique of Goretex waterproof, breathable rainwear and discovered (via some highly amusing home testing) many products that rival Goretex, including coats from North Face, Pearl Izumi, and L.L. Bean. Following his advice, I checked out L.L. Bean's online offerings and ended up with a three-quarter length waterproof raincoat in a conservative, versatile black. (I passed on the version with the wool lining, figuring I'll end up layering with some type of fleece or wool jacket anyway.)

It was cheaper (and easier to pronounce) than Arc'teryx and L.L. Bean's phone customer service is still awesome.
Posted by The Mysterious Traveler at 1:49 PM