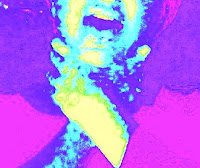 I have been avoiding blogging this week in part because I'm doing a lot of blog-like writing for paying clients. Which is very exciting because that's the sector of my business I want most to develop. Yahoo! Whoopee!

But I'm also avoiding blogging on this personal blog because I just can't stand to admit that I have yet another cold-type thing that starts as a sore throat and then is characterized by an annoying little cough that gets worse as the day goes on. There's no fever, and very little congestion. And Zorg observes that it doesn't even seem to be contagious.

Deciding that perhaps I erred with the first two bouts of this in March by trying to ignore them, I gave this third one my full attention. I spent one entire afternoon in bed. I have been taking Zicam (some kind of homeopathic cold remedy) every six hours, eating raw garlic every six hours, and taking half a hydrocodone or something similar every six hours. The hydrocodone is the only thing that suppresses the cough, and I'm pretty much immune to any drowsiness from it.

I have drunk gallons of chicken soup and tea. Zorg has fetched me hot and sour soup and dumplings with incendiary ginger-garlic sauce from Fu Man Dumpling (this is now his favorite food, as well as mine). I have done slow yoga.

I am slowly getting better, coughing less, and fully expect to be able to do a bit of dancing at the World Rhythm Festival this weekend. But I am really fed up with this bug. Yes, I know it's nothing in comparison with real health problems I've had in the past or with some of the serious injuries friends of mine are currently dealing with, but...three rounds of this in two months? What is it?