There was a stupendous turnout for Saturday's Fremont Solstice Parade, which featured a record number of nude (but painted) bicyclists and clothed (but barely) belly dancers, along with a mix of theme floats ranging from the exuberant to the political to the downright inscrutable.

The fun continues tomorrow from 11 a.m. to 7 p.m. with the associated Fremont Fair, one of Seattle's better street festivals.

From the thousands of photos uploaded to the Flickr photo-sharing site just hours after the event, you'd think that every sentient being in Seattle with a digital camera had been at the parade. To view them, go to Flickr.com, search on "solstice," and then click "most recent." Here's one of mine: 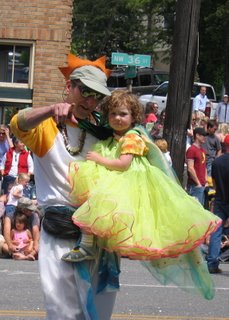 Posted by The Mysterious Traveler at 7:34 PM