The good, the bad, and the merely adequate 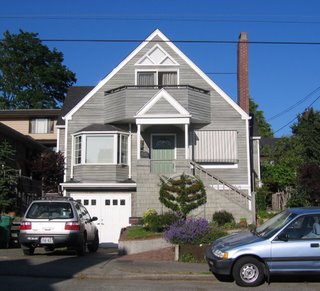 Our new exterior window awning was installed today, leading me to reflect on the joy of dealing with a great contractor. In this case, it was Rainier Industries. They've been in the awning business for more than a century, and they've really got it down. (They also do banners, yurts, tents, marine window systems, and trade show displays.)

A very knowledgeable salesman came out to the house with a book of decent-sized fabric samples. He took measurements and photos, and discussed my options without any pressure. I ordered the most basic awning (hand crank, not the elegant motorized styles) but he treated me like a valuable customer.

Last week the head of installation called, told me our awning was due to arrive, and scheduled the installation for today. Sure enough, right on time this afternoon I got a call from the installers saying they were 15 minutes from the house. They arrived, did the installation (which involved a very tricky bit of work where the porch roof is close to the top of the window), and then called me out to train me on using the awning. The awning is exactly what I ordered, and performed just as the salesman said it would. Rainier Industries: heartily recommended.

(And exterior awnings are also highly recommended. With the awning deployed this afternoon, the glass on the West-facing picture window remained cool, and so did the living room! A picture will be posted when Blogger's picture uploading feature is back online.) (NOTE: Photo added 6/28. And Rainier Industries called this morning to ask if I was happy with the awning!)

The nice experience with Rainier reminded me it was time to call the company that is supposed to be fabricating and installing our screen door. I ordered the door a week before I ordered the awning, but there hasn't been a peep out of them. Of course, it took me a week of nagging them to get the door guy out here to do the measuring.

I called Door Company X to find out where the door was and their front desk woman (why is it always a very young woman?) went off to ask the salesman. Gosh, golly, gee, (she reported back) my door had JUST arrived! She told me to expect a call from their installation scheduler "in a few days." I came away with the impression that the door had been languishing there for a while and that the installation scheduler would get around to calling me, eventually. (Note that the Rainier Industries folks called to schedule the installation when they knew the door had been shipped to them; they didn't wait for it to arrive, much less for it to sit around.) Door Company X will have the opportunity to redeem themselves when the door arrives -- if it is the special material I ordered and if they follow my request that it be installed using hinges that allow us to pop the pins and remove the door in the winter.

Meanwhile, I'm waiting to hear from our lawn service (we'll call them "Gone to Seed"). We've been using Gone to Seed for four years, and had been extremely pleased with the weekly mowing and edging (particularly the painstaking edging) until this year. Gone to Seed used to be a two-man operation -- a Polish fellow and one of his friends. Apparently business has been booming, because last year much of the time the work was done by a "second team" of Polish guys who didn't speak any English. Which was fine -- we waved a lot. But this year our small yard job must have been assigned to the bush leagues: two guys, not Polish, and apparently not experienced in using an edger or caring for lawns and gardens.

They'd probably do OK mowing a large, rectangular meadow. But edging? Their edging was eating big chunks out of my plants, blasting grass clippings all over the patio and garden shed, and, this past week, they took big divots out of the front lawn where they'd been swinging the gas-powered edger in uncontrolled semi-circles. In the back yard, they were too lazy to disconnect our green plastic hose from the black soaker hose buried in the flower bed. To move the green hose out of their way, they just ripped the attached soaker hose, and all the plants growing on top of it, out of the entire length of the flower bed and threw it on the patio! (Well, they did take the trouble to throw the plants they ripped out back on top of the live plants -- so I didn't notice the savaged plants until they'd died in the hot sun that afternoon.)

I sent a letter, with a photo of the bare brown gouges in the front lawn, to the owner of Gone to Seed and explained the problems. I said the two apes would not be allowed on our property again, and that he could either send his experienced crew or let me know he no longer wants our business. Of course, we will not be paying for last week's "service," if he has the nerve to bill us for it.

So, anyone know a good lawn service in Ballard?
Posted by The Mysterious Traveler at 10:52 PM