The sound of one wheel, exploding 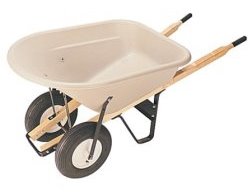 I've always taken wheelbarrows for granted, and that, I learned today, was my mistake. Reading Consumer Reports and scouring the wheelbarrow reviews on Amazon, I learned that there are a lot of poorly designed wheelbarrows out there. Lightweight plastic ones that crack; one-wheeled barrows that tip over under heavy loads. And, the case of our old metal hardware store wheelbarrow, ones with wheels that explode.

I went off to Home Depot to get a replacement wheel, but found there were several variations on wheel size and axle length. It was back home to get the wheel off ours and bring it in for comparison. Unfortunately, the wheel was attached to the wheelbarrow structure by two steel braces, and each of the braces was held in place by two long threaded bolts, and each of those bolts was kept in place by two rusty nuts. The nuts were cleverly positioned right up against the braces and the metal barrow itself in such a way that it was impossible to get two wrenches, or one wrench and one pair of pliers, into postion to hold one nut while loosening the other. (Are there such things as needlenose wrenches? That was one of the more pleasant thoughts that crossed my mind during this episode.)

With the wheel still firmly attached to the wheelbarrow, I relinquished my grip on the wrenches and I went inside to do some online research. It was not as conclusive as I'd hoped. One of Consumer Reports' top three wheelbarrows was roundly slammed by five irate buyers on Amazon. All five gave it the lowest possible rating, and one seething review concluded: "After two months with no response from the manufacturer, I left it at the curb for the trash pickup."

Sigh. The Brentwood Industries Double Wheel wheelbarrow got top ratings from Amazon buyers and, since we have Amazon free shipping, I ordered it -- after first scrutinizing the photos to make sure it has a better system for attaching the front wheels. (Yes, it has double front wheels for stability.)

How can a wheelbarrow get this complicated?

Still haunted by the wheelbarrow experience, I headed down to the basement tonight to see about assembling the little 20" glass occasional table I bought for my mom's condo balcony. I unpacked it and discovered that you just pop the legs into little plastic braces under the table; no screws, no bolts, no nuts, no fuss. Divine. I wonder if they make wheelbarrows.
Posted by The Mysterious Traveler at 12:31 AM