Thursday morning I stood on a ladder in a local community center winding mini-lights into long garlands of artificial greenery while macaws swooped through the room.

When I worked downtown in a high rise office park, I used to wonder what was going on in the "real" world. Now, I know. Volunteers are decorating for Christmas and people are teaching their macaws to fly. 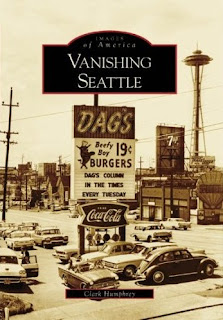 While on the topic of local oddities, I want to note that Clark Humphrey's new non-fiction book, Vanishing Seattle, will be released Monday. Look for it in local bookstores and on Amazon. If you have the opportunity, come to the official release party at Epilogue Books in Ballard, Tuesday, Dec. 19, 6:30 - 8 p.m.

With rare photos of Seattle landmarks from the past half century (from Frederick & Nelson to The Cyclops, Glamorama, and Ruby Montana) this may be the perfect Christmas gift for Seattle aficionados of all eras. (Yes, of course it has the Twin Teepees!)
Posted by The Mysterious Traveler at 8:09 PM