Three years ago I bought a Lentek Pet Chime.

After it arrived, I decided it would never work for our cats. But tonight, while cleaning the basement, I came across the Pet Chime and figured, "What the heck?" If Sheba, Zoe, and Kaylee can figure out that they need to step on the big yellow button to get me to open the door and let them in, I'll be impressed. (Actually, I'll suspect divine intervention.) 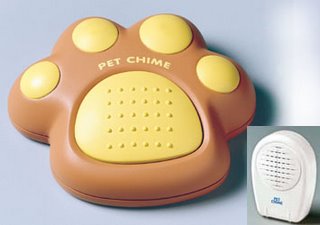 The Pet Chime is made up of two components: A brown paw with a yellow "doorbell" in it and a white chime. The doorbell gets a 9 volt battery and goes outdoors; the chime gets three AA batteries and stays indoors.

I sat down at the kitchen table and installed the batteries, with Zoe and Kaylee helping out. Then I got to the part where you toggle a switch to set the chime tone. Toggled one way, it goes "Woof-woof!" (It seems the Pet Chime is a canine-centric device.) Toggled the other way, it does the traditional "ding-dong" sound. Unfortunately, it wasn't clear which direction yielded which tone.

So I toggled it to the left, and hit the yellow button. Mistake.

Yep, they're going to love this device.

[NOTE: The Pet Chime also came to the attention of columnist Dave Barry. Now I'll have something to chat with him about at the Erma Bombeck Humor Writers Workshop in Dayton next weekend.]
Posted by The Mysterious Traveler at 8:47 PM